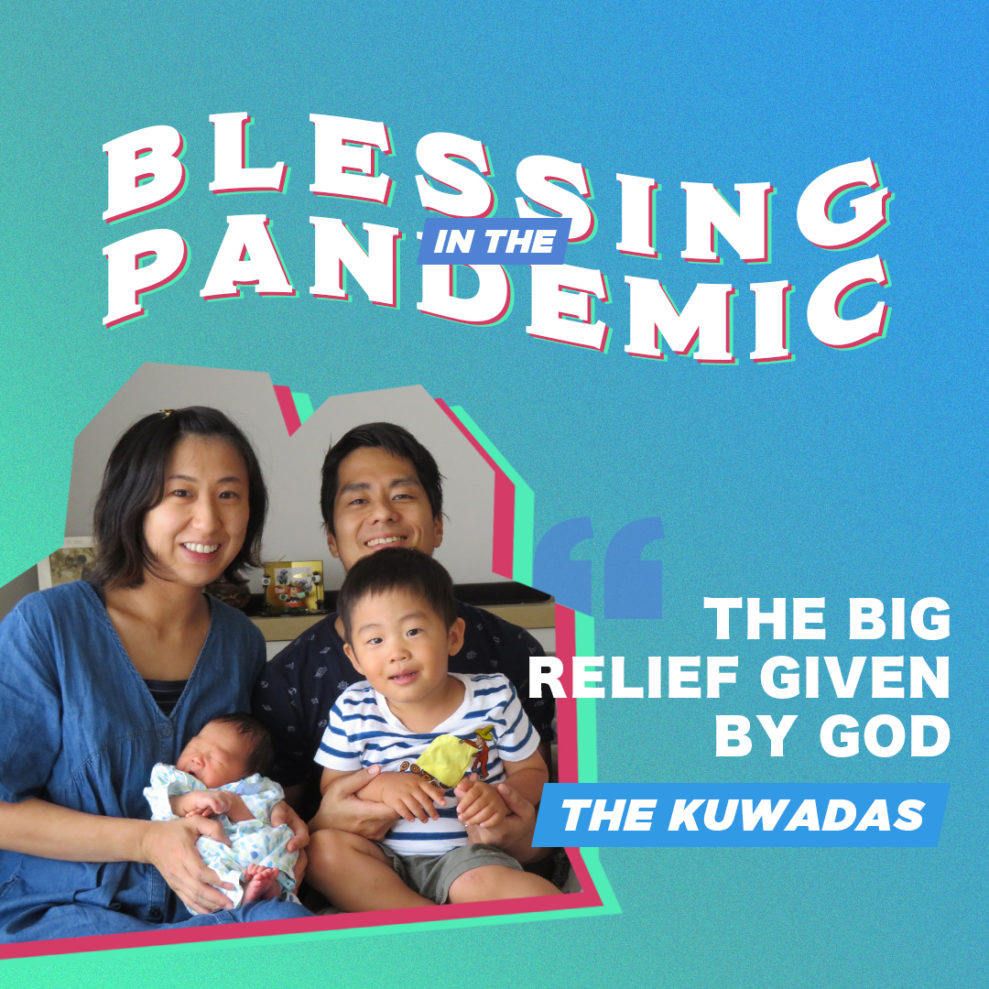 Today we will be continuing our “Grace during the pandemic” series!

We have been talking about what kind of grace people have been receiving during this pandemic season.

Today I will be interviewing our picnic loving couple, Mr Sho and Mrs Chihiro!

So without further ado, let’s get straight in to it!!!!

:Right, let’s get in to the questions!
Question number one!
Has there been any change since before and after the pandemic?

: Hmmm, yea I guess you could say that the birth of our second son was a pretty big change.

:That is definitely a big change!! When was he born?

: He was born in June this year.
It was at a time when corona had already hit and we didn’t know what was gonna happen throughout the world. I had lots of different worries.

:That’s right.
I also had worries of my own.
I was told that in order to prevent any infection of the virus spreading at this hospital I wasn’t allowed to be with Chihiro during the birth, so I was worried if she was gonna be ok.

Because it was my second child, I had already experienced how tough it was to give birth. I was always worrying whether or not I could get through it alone.

:Giving birth is already a big event in itself, but having to go through that alone is too scary to even think about.

How did you overcome all these difficulties?

: I think it would have been impossible to overcome relying on just our own power.

: There was a particular bible verse that really helped us 。

“Do not be anxious about anything, but in every situation, by prayer and petition, with thanksgiving, present your requests to God. And the peace of God, which transcends all understanding, will guard your hearts and your minds in Christ Jesus.”
‭‭Philippians‬ ‭4:6-7‬ ‭NIV‬‬

There would be times when we became worried because we were only looking at the situation around us. So just like this bible verse said, we entrusted all of our worries to God. When we did that, our hearts were filled with peace. But not just peace, we also felt that God had given us his grace.

: I also felt a great peace whenever I prayed. Even during the times when we had no idea what to do, we could always entrust everything to God. And when we entrusted everything to Him, he wrapped us in his peace.

:That’s a very encouraging bible verse!
It was amazing how through prayer you were both able to receive peace from God!

And you were also able to feel his grace?

:Thats right. First of all God graced us with time. Because of the pandemic I started working at home more, which meant that I was able to spend more time with my family than I could before.

: That was really wonderful for me.
Sho was able to play with our older son, or sometimes he would also help me with things around the house. It was great to spend more time together.

: Amazing! Even in a difficult time you could still receive God’s grace!

: Yea!
Also I felt his grace many times during the birth. The birth of my first son was a little complicated so I was feeling a bit worried about doing it again, however the birth of my second son only took an hour and a half from the time I arrived at the hospital. It was super easy!

And although Sho wasn’t able to be there during the birth, after the birth he was able to take two weeks worth of paid leave.

Also there were lots of times where he would work from home, or come home from work early. He often helped around the house and helped raising our kids. His help was a huge blessing.

: My company originally had a system where there was no paid leave, so for me to be able to get 2 weeks paid leave was nothing short of a miracle. Even during a pandemic, we really felt God’s grace being poured out on us.

: I also think so.
We also experienced God’s healing during this season.
Actually, when I found out that my wife was pregnant with our second child, I developed a panic disorder.

: Oh really? What sort of disorder is that?

: Whenever I was on a train or in a crowded place, it became hard for me to breath. Whenever I was worried or in a high pressure situation the symptoms would worsen. When it was at its worst, I wasn’t even able to go to work.

: That definitely sounds like a tough disorder to have.

: It really was tough for him. I always kept praying that God would heal him.

: Yea, but then at the beginning of the year, a guest speaker came to church and prayed for healing. When he prayed I heard God say to me “I’m going to heal you.” From that day onwards my heart is at ease and I haven’t needed any of the medication that I previously needed.

: Seriously?! God’s word sure is powerful!

:I wouldn’t say that the disorder has disappeared completely, but now I have no issues when riding the train, and I can pretty much live a normal lifestyle.

: God heals and gives rest all in his perfect timing.
I’m really happy to hear that your disorder is getting better and better!
We can praise God for that!

: Absolutely. During this pandemic God has given us huge amounts of grace and rest. Even when we had big worries or problems, in the time that God gave us we were able to find solutions

: Wooow! This testimony is really filled with so many miraculous stories!

Last of all, do you have any words of encouragement for others who are going through difficult times during this pandemic?

: I want everyone to protect their hearts. If your heart is filled with worries and troubles, this can also negatively impact the people around you. But if you pray to God and receive his peace, then you will be able to have a positive affect on others.

: I want to share a bible verse that I really held on to during this season.

“And we know that in all things God works for the good of those who love him, who have been called according to his purpose.”
‭‭Romans‬ ‭8:28‬ ‭NIV

God is able to change any situation in to one that we can find value in. He sees all of our troubles, so I want everyone to have faith in God, and entrust everything to him.

I also want everyone to stay positive. During this season it is hard to meet people directly, but we can still connect to each other online or on the telephone. I think that doing this will not only help you, but it will also help the person who you are connecting with.

: Oh! I learnt a lot of new things in this interview!
I could realise again just how much power there is in prayer!

Was everyone else encouraged too?
We will keep continuing this series to be sure to tune in next time.

Thanks for reading the blog y’all! I’ll be waiting for your likes and comments!!
Before I say goodbye, I wanna introduce to you Lifehouse Church Osaka.I usually appear in their programs!

* I’m usually the emcee for the Japanese Service so please check it out!

If you wanna know about my church Lifehouse Osaka, click here.

If you wanna know about Language Exchange which is supported by my church, click here.

If you wanna know about the Youth’s Program, click here.

If you wanna know about the Kid’s Program, click here.

Your presence is so important to me!!!

Love and Peace by Pande Mike